The morning was bitterly cold, and we immediately rode through the border crossing. The fog was still lingering in the valleys, and within a few miles, we had the uphill for the day that involved some “work.”  (Our tour leader, Bob, has a great way of understating the climbs.)

The day was just cold and miserable, and the pack we were riding in (Greg, Robin, John, Roman and myself) weren’t properly bundled up. We accidentally found a coffee shop, so we warmed up with cappuccinos and hot chocolate.  I poured my hot chocolate into my thermal water bottle to have some warmth for the ride.

We had fun riding through the forest and picked up the pace to get to lunch. Due to the cold and unexpected distance to lunch (about 5-7 miles after I expected it), I got a bit hungry and mean. I wasn’t using much nutrition in my bottle on the trip and was counting on lunch to refill my tank.  We picked up some lunch at the grocery store (as the restaurant wasn’t open yet) and tried to warm up at the coffee shop next door. At one point, I was so cold and miserable, I seriously considered not continuing on with the day’s ride.

I toughened up and got back on my bike. After lunch, the cold, cold descent was on a scenic, quiet bike route and then undulating roads into Ljubljana. The ride in was nicely paced and fun, so I was happy I continued.  At the concluding happy hour with the tour group, I found out we weren’t saying goodbye to everybody – some more folks were joining us on the way to Bled.

Off tour: Ljubljana to Bled

Before we started the tour, we knew we were going on to Bled. The question was whether we would take the train or ride there. My big concern was having enough gears to cross the pass into Bled. Since other folks would be riding too, I didn’t have much of a choice. The two couples (Robin and John, Chantel and Bob) set off ahead of us that morning. I wanted to catch up, but I didn’t think we could make up the difference.

While the start/stop getting out of town was difficult, I liked the cycling infrastructure. We had a bike lane on the major thoroughfare that separated us from cars and pedestrians, and there traffic signals for all three.  The bike lane had mostly commuters, and one was upset when we passed her without using a bell.

After some time, we stopped at the picturesque town of Škofja Loka. There was a Citroen bus caravan that we wanted to photograph, and we ran into the two couples at a coffee shop there. I had a great farmer’s cheese stuffed pastry and a tasty tangerine soda.

After this stop, we had a brisk flat with a bit of headwind. I was careful to maintain an easy pace as I was wary of the mountain pass. The climb itself wasn’t too bad: it had short steep sections relieved by “flatter” sections (3-6%). Near the top, we had gorgeous views looking back at the start of the climb. A few switchbacks later, we saw a WWII memorial on the hillside. At the top of the pass, we had amazing views of the valley and a quaint church down a walking path. We could also see the snow-capped Julian Alps in the distance. 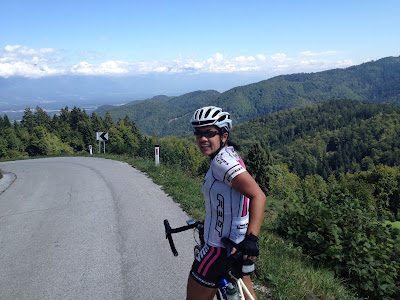 The descent into Kropa was shaded, cold, and bumpy. My forearms got tired from squeezing the breaks so often. We went into the museum at Kropa, and the attendant turned on the loud, but neat music box for us. It even had a drum head and cymbals.

After another descent, we arrived at Bled, which included a quiet route over a gravel path. On the way in, we took a route that was different than the sign to Bled. I stopped after the sign, and Chantel (Bob’s wife) went in a different direction from the group. I remember her yelling out, “Every man for himself!”  I like the spirit of exploration and the lack of handholding. It embodies the spirit of Bob’s tours. As Chantel said, Bob’s philosophy is that he doesn’t go back.

Before checking in to our respective hotels, we rode around town to see where everyone was staying and decided to meet at Penzion Mayer for dinner. The mushroom soup that night at Penzion Mayer was one of my favorite soups of the trip. (Earlier that day, we saw that the King Boletus mushroom was in season, so I made it a point to order mushroom anything afterwards.)

Our flat from AirBnB was awesome – and our hostess left us with a basket of fresh fruit. I’m a huge fan of how the AirBnB folks go out of their way to make us feel welcome.

Off tour: Bled to Bohinj and back

We met up with Robin and John for the ride to Bohinj and back. At one point, when asked, Roman said the next bit was undulating. Within a mile, we started our penultimate climb of the day – a Cat 2 Strava climb of 4.3 miles, averaging 7.5%, and climbing 1, 657 ft. During the unending climb, we went through two tunnels and saw a warning sign of 18% grade (the highest grade warning I had seen on the trip). I steeled myself and continued on. The climb was so long, I sweated through my arm warmers. This made the descent even colder. At the top of the climb, we could see a village at the bottom of the valley. After descending a bit, we started to see a different village ahead on a slope with hair pin turns.  Next thing you know, we went through the village at the bottom.  We were so cold, our coffee stop ended up being a long lunch stop. We filled ourselves up with tea with local honey, hot cocoa, mushroom soup, pasta and mushrooms, goat, and strudel. In the ride through the valley, we went through several picturesque villages. We heard and saw cattle bells hanging off cows instead of spectators. We finally descended to Bohinj Lake and rode around the lake to the entrance to a waterfall. On the way, we encountered some unexpected climbs to the entrance. There was a 20 minute hike up steps to get to Savica Falls, and when we got there the viewing area was a bit crowded so we took some quick photo graphs and headed back. Along the hike, we saw tons of freshwater fish in the clear water.  The sun was starting to wane, and I was worried about getting back to town before dark. 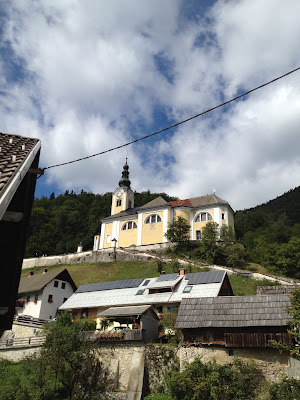 The road back to Bled was relatively flat with a cross and headwind, so Roman led our paceline home. We saw two cyclists in the distance, but they stayed away for several miles. John moved to the front and slowly reeled in the two. They were quite animated when talking to us initially, but we couldn’t understand them. Roman and their lead cyclist pulled us all the way back to Bled. It was nice finishing the day with a brisk fast pace, and we had plenty of daylight left. When we got back, we found fresh-baked apple strudel from our AirBnb hostess! That night, I had trout for dinner as I had been thinking about fish all day.

Off tour: Bled East and back by Vintgar Gorge

The routes we used the previous two days had been recommended (and defined in GPSies) by Bob.  Using Strava, we looked around for suitable routes with just enough climbs at 3,000-4000 ft and around 40 miles. I then created the route for the Garmins using GPSies. This worked out pretty well – we used the route of a Bled local so the climbing was nice and the roads were reasonably safe.

We met with Robin and John at Helia’s, the travel agency / bike rental company that transported our luggage, and the travel agent recommended some sights along the way. We took a nice cycling path near the main road from Bled to Lesce. This was a well maintained route with a nice bridge. The cycling paths and bike lanes around Slovenia show that they really take care of their cyclists, and it shows in the number of cyclists we saw in our time there. During a Monday afternoon, we saw at least a dozen cyclists riding about.

After one of the first climbs, we saw gorgeous views of a valley and the mountains beyond.  We rode through the valley to the other side and saw those same mountains up close later in the day. The route felt comparatively flat, but we still climbed over 3,000 ft and went over three Cat 4 climbs. On one of our detours (uphill, of course), we rode by the ruins of a castle.

Our route went by Vintgar Gorge, and we had a nice stop there. It had neat wooden pathways through the gorge and beautiful waterfalls. I personally liked it more than Savica Falls. We were so weary of riding, that this was our last ride for the trip. 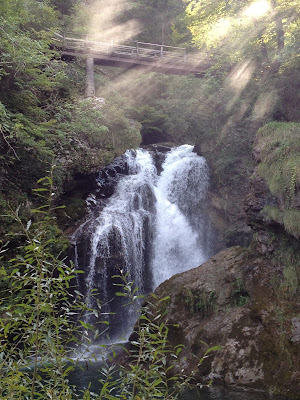 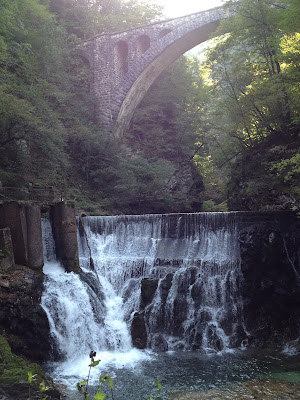 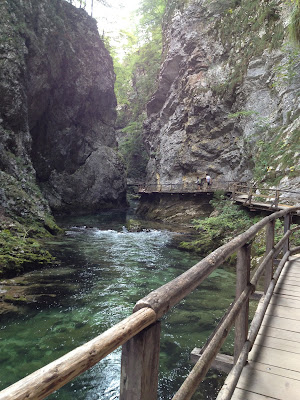 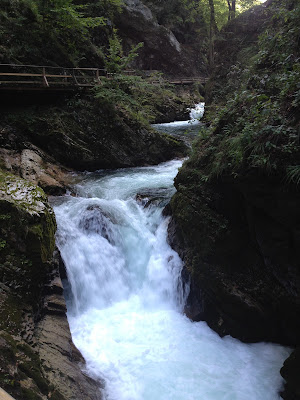 The next morning, we tried to rent a car to take us to Vršič Pass.  Since it was the end of the season, there were none available. Weighing our options, we decided to head to Vienna a day early as there was much to see there.

We used the morning to visit the Bled castle atop the cliff and eat ice cream while enjoying the view of the lake. Interestingly, a castle/fortress had been at that location for over a thousand years. Nowadays, a castle on the hilltop looks pretty, but back then, it made great sense from a defensive standpoint. 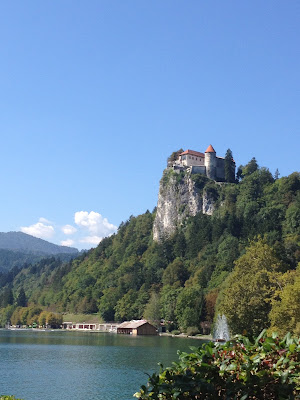 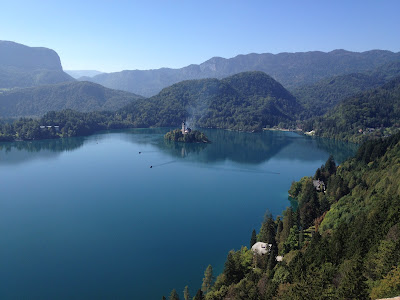