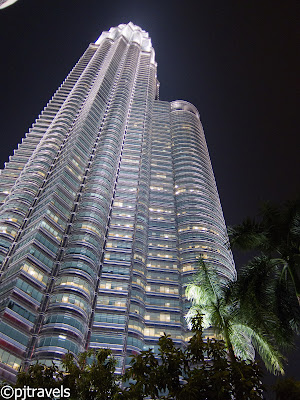 Some quick thoughts before I head out again.

Malaysian culture is a mix of Malay, Chinese and Indian. There are distinct benefits to being ethnically Malay, such as well-paying positions in public services and preferences in college entrance. As defined by their constitution, you must be Muslim to be Malay – but the converse isn’t necessarily true. You’re marked as Malay on your driver license – the police can raid a bar, see that you’re Muslim, and arrest you. You’re also Muslim for life – you can’t convert! (Very strange coming from the US with its freedom of religion.) To marry a Muslim in Malaysia, you must convert to Islam. Interestingly enough, folks go to Singapore to get married to circumvent this law.

KL is a city obsessed with shopping and eating. Malls lead to other malls to other malls – with tons of food options around. I finally tried geoduck and mantis prawn. Fresh-out-of-the-tank geoduck was gross/fishy as sashimi and alright in a hotpot. The mantis prawn, while also gross looking, was delicious – similar to crab in texture and taste. I even got over my disgust of the “mantis” part and ate the meat in both claws. It would have been a shame to let it go to waste.

The Vietnamese food there was bleah. It’s 2 hours away from Vietnam, but it’s is way better in Houston!