The sun came out for our ride from Da Nang to Hue, and it was one of my favorite rides of the trip.  We rode up High Van Pass, which rises 500 m above sea level over 9 km and descends back to sea level over 11 km.  The views going up and down the pass were just stunning. We continued down the coast to a lovely beach resort (Lan Co) for lunch.

We turned off the main highway and went through the country roads to see the ornate tombs of Central Vietnam.  The citizens of Hue bury their dead in the countryside outside of town, and we often saw massive tombs with simple houses next to them.  Over 40 km, we saw more tombs than people.

Another highlight was the gaggles of preschoolers walking home from school on their own.  They didn’t have anyone guiding them, but they seemed to know where to go. They’re also the most enthusiastic and genuine when they’re waving their hellos. Western cyclists are still a different enough sight that they’ll run out of their houses to wave hello to us.

Pete also did an awesome job of riding today. He rode nearly 50 miles! It definitely took me more than a few weeks of riding to build up to a half century. 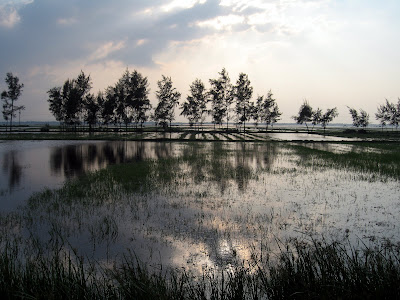