On the walk to the tram to the train, we stopped at the grocery store, bakery, Hundertwasser Haus and a design store. Needless to say, we missed our intended 10:20 train to Bratislava. Since it’s hourly, we decided to go to the Heeresgeschichtliches (Military) Museum to wait for the next train. The Austro-Hungarian empire had a long military history and the museum has been there since 1856, so we spent more than an hour there. We saw lots of armor from the 1500’s onwards. Also on display were guns, swords, spears, other brutal weapons, uniforms and battle field flags throughout history.

When I took American History in the 9th  grade, I learned that the assassination of Archduke Ferdinand in Sarajevo started World War I. Back then, I didn’t know much about the Hapsburgs, so I was rather confused. After spending some time in Vienna, I have a bit more context. The museum had the car Franz Ferdinand was riding in when he was assassinated along with his military uniform that day. I have to admit that the slashes and blood stains were a bit gruesome for me.

While the English bits were sparse, there was a hall dedicated to World Wars I  and II. It was interesting to read a different perspective of the wars and why they were fought.

We finally got on the train to Brastislava, which was about an hour away. We walked around the castle grounds and then searched around for the Museum of Clocks. It’s housed in the reputedly skinniest house in Central Europe, so it’s a bit hard to find. Afterwards, we walked around the Old Town, found a cute cake shop, and then headed back to Vienna. 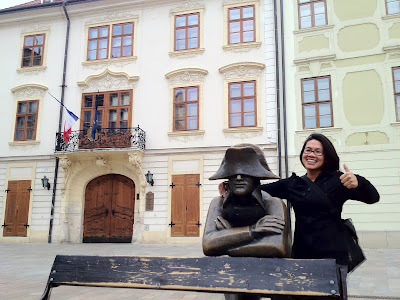