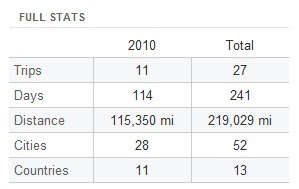 Somehow without expecting it, I’ve become a road warrior in the second half of this year. I’ve done trips here and there in the first half, but the bulk of the miles started with the ’round the world trip late June. I didn’t realize how much I was gone until I saw the chart from TripIt last night.

On the other hand, I saw that I was soo close to Executive Platinum (EXP), I decided to to a mileage run by flying from Austin to Nashville, and then from Nashville to Dallas to Tokyo to Taiwan. I had to do the Austin to Nashville leg to get enough mileage on American. The benefits make absolutely no sense to someone who doesn’t travel much, but I’ve spent more time on airplanes than on my bike this past year and it does matter.

Just on this trip alone, some of the nicer things the airline folks have done for me:

I chose Taiwan since my college-roommate is an expat here, Taiwan doesn’t require a visa for US citizens, and I’ve been meaning to visit.